The Official Game of the Internet[]

Codex:  The main guidelines for the Midian DFRPG[]

Books of the Apocalypse:[] 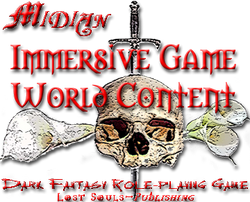 Ebonstone: The Elder Kingdom of Zar[]

The Abstract: a Midian Forum Compendium[]

The Brotherhood of the Pact[]

Community content is available under CC-BY-SA unless otherwise noted.
Advertisement